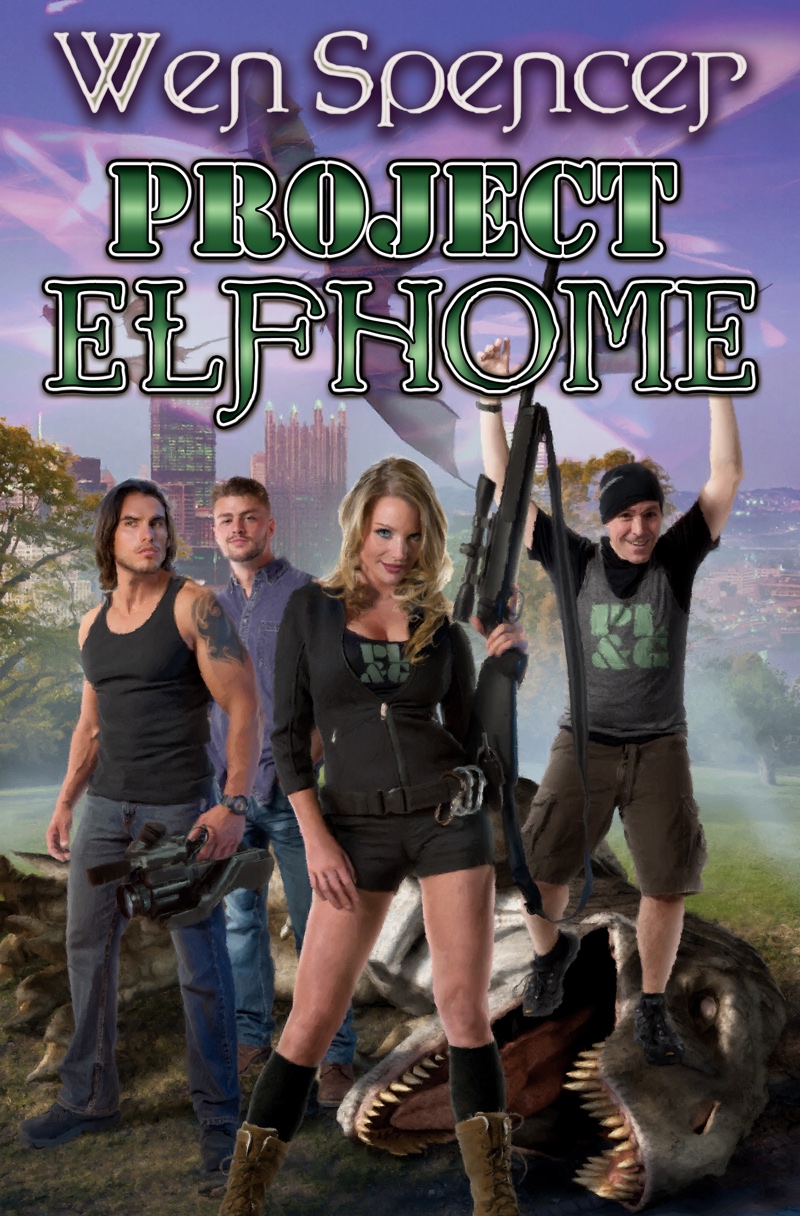 An Anthology of 6 novellas and shorts set in the world of the Elfhome Series.

For every story written, there’s a thousand others not told. Lives interweave. Fates intersect. People change one another, often without realizing the impact they’ve made on others. They come together like a mosaic, little pieces creating a greater picture.

Project Elfhome tells the stories of those impacted by Tinker and Windwolf as they struggle to make Pittsburgh a safe haven. Some of the characters are familiar: Stormsong, Pony, Blue Sky, and Lain. Others are new to readers.

Law forages for wild plants and fish to sell to elf enclaves. A social misfit, she drives a hundred year old Dodge, has a pet porcupine, and saves damsels in distress in her spare time. A mysterious phone call sets her on a collision course with danger as she races to save a young female elf.

Jane Kryskill is the producer for the popular TV series Pittsburgh Backyard and Garden. She spends her days keeping her host, Hal Rogers, from getting himself killed as he takes on man-eating plants. She’s not happy when the network drops famed naturalist Nigel Reid and his cameraman in her lap to film Chased by Monsters.

Olivia is sixteen, a runaway wife of a religious cultist, illegal immigrant, and soon to be mother. As Pittsburgh plunges into war, she makes a desperate bargain with the mad elf lord, Forest Moss. As the war between the elves and the oni builds to a head, these three women struggle with their own problems, supported by a circle of unique friends, yet entangled with each other.

Less than a mile from the Rim, where the enclaves of Wind Clan elves was backed by virgin forest, one lone façade blazed in defiance. The red neon sign proclaimed fearlessly “Essie’s Original Hot Dog Shop.” A small blue sign stated firmly, “Home of the ‘O’ Fries, wings and barbeque, subs and beer.” The door stood open, letting out a wave of hot perfume of grilled hot dogs, fried potatoes, melted cheese, and spilled beer. How it managed to serve this bounty of food while stranded on an alien planet, under siege during a war between two inhuman races, Olivia had no idea.

It was, however, a welcome human refuge. She paused just inside the door, blinking at the sudden unforgiving light of ancient halogen overheads. The busy cooks ignored her entrance, lifting baskets out of the cooking oil, turning hot dogs, and delivering up paper-lined baskets while chanting out filled orders.

Olivia pushed her way into the crowd waiting for their food, beers in hand. The day been a blur and her stomach was clenching up into a tight knot that lately was followed with vomiting. She was vaguely aware of the wave of silence and widening eyes.

“Next!” The girl at the counter cried, slapping the last slip onto the counter by the cooks.

Olivia was fairly sure that she was jumping the line, but the line seemed to be in the process of trying to escape what was trailing behind Olivia. Nothing she could do about the situation, so she was determinedly ignoring it for now. She scanned the menu. No wonder the restaurant still had food after a month of being stranded on another planet. It featured jumpfish, saurus, stag, and something called indi. The fish was breaded and fried, the indi was served as kabobs, but the other meats were made into sausage as substitute hot dogs. Her stomach nearly revolted at the idea of mystery meat on a bun.

“Can I have a large fries with cheese?” The menu board proclaimed them as homegrown potatoes, which meant they most likely came from one of the South Hills farms. She might have problems with the grease if she just ate fries. She scanned for a safer option and spotted a turkey sandwich listed at the bottom. Until a few weeks ago, there were large flocks of the wild Earth birds everywhere, flourishing in the abandoned backyards all over the city. By the end of winter, though, they might be extinct on Elfhome. “Can I have a turkey sandwich with lettuce, tomato, onion, and pickles? And a ginger ale.”

“Turkey hoagie with the works. Large fry…” The girl trailed off as she glanced up and then behind Olivia. “Oh crap.”

Olivia ignored the curse and the temptation to turn around. Nothing she could do. She pushed a crumbled twenty across the corner. She tried not to think of what she done to make the money. Shame, however, burned hot on her cheeks.

The girl continued to stare until Olivia waved a hand in front of the girl’s wide eyes. “Oh! Yes!” She made change, counting out bills and coins. Halfway through the girl paused and frowned at Olivia. “You’re not Princess Tinker.”

“No, I’m not.” Olivia said. The girl continued to look at Olivia, obviously expecting a name. Olivia had abandoned her human name when she fled Kansas. For weeks she’d been introducing herself only as “Red.” (Her hair was more auburn than carroty-red; besides, the nickname of “Ginger” pissed her off.) What was the name that Prince True Flame had given her? Somehow he’d known that “Olivia” was Latin for “Olive Tree” and then twisted it slightly. “I’m Olive Branch Above Stone.”

“Stone?” The girl’s frown deepened. Her fingernails and lip polish was Wind Clan blue and she was wearing a Team Tinker T-shirt. Her glance flicked to over Olivia’s shoulder. “Eeeewww.”

Olivia clenched her hand tight on her change. It be one thing if the girl was simply a bigot, but her reaction was much more selective than blind prejudice. Obviously elves were fine as long as they were pretty. Turn the other cheek…with my fist. But Olivia resisted the urge. She had to think about “them.”

“Is something wrong?” A deep male voice said in Elvish.

Olivia sighed and turned around. So much for ignoring “them.”

Elves were impossibly tall, broad shouldered, and handsome even to the human eye. The holy caste of sekasha was no exception. The elf warriors added in “heavily armed” and “extremely dangerous” to that description. Considered above the law, the sekasha could and would kill anyone that pissed them off. In the last few weeks, they’d mowed down oni soldiers and spies, suspected human collaborators, a Pittsburgh police officer, and one of their own lords. Advice on the street was to stay as far as possible from the sekasha.

Which was impossible when five of them were intent on following Olivia around.

The ones quickly clearing out the hot dog shop were Wyverns; sekasha from the Fire Clan and part of the royal troops that came to Pittsburgh with Prince True Flame. They looked like identical quintuplets to her, all red haired and stunningly green eyed, and exactly a foot taller than her. Besides the scale armor vest and the protective spells tattooed down their arms (both in Fire Clan red,) their caste was identified by their long swords said to be magically sharp and able to cut through anything. (Nothing was said about the rifles and a multitude of knives that they also carried.)

She wasn’t sure which of the Wyverns had spoken. She could barely tell them apart. Unsure, she fixed her gaze on the one that seemed to be the leader of the five. At least, he’s the only one that addressed her directly all night.

“It’s been a hard day and I’m easily upset.” She kept to the truth since elves thought lying was the ultimate sin. “It’s in the middle of the night, in a war zone, I have no longer have a house to go back to, and I’m going to …” She had no idea how to say vomit in Elvish. “Hurl.”

“Saemata.” The counter girl murmured. “Forgiveness!” She squeaked when both Olivia and the holy warrior glanced hard at her. “I – I –I couldn’t help but overhear.”

“I’m pregnant!” She snapped. “And my stomach is empty. I need to eat something.”

“Holy shit!” The girl breathed. Another hard look made her tear off the order and slap it down in front of the nearest cook.

“And this place serves food?” The Wyvern’s tone suggested that he doubted that was the case. He eyed the sizzling basket of French fries cooking in hot oil.

“Yes.” Olivia growled and turned back to the counter. “Can I have my ginger ale now?”

“Oh, sure, here.” The girl pulled a cold bottle from the standing cooler and popped off the metal lid. A tiny cloud rose out of the top of the chilled bottle like an escaping genie.

Careful for what you wish for. Olivia had wanted safety for her unborn child; she’d gotten a twenty-four hour guard of the scariest elves on the planet.