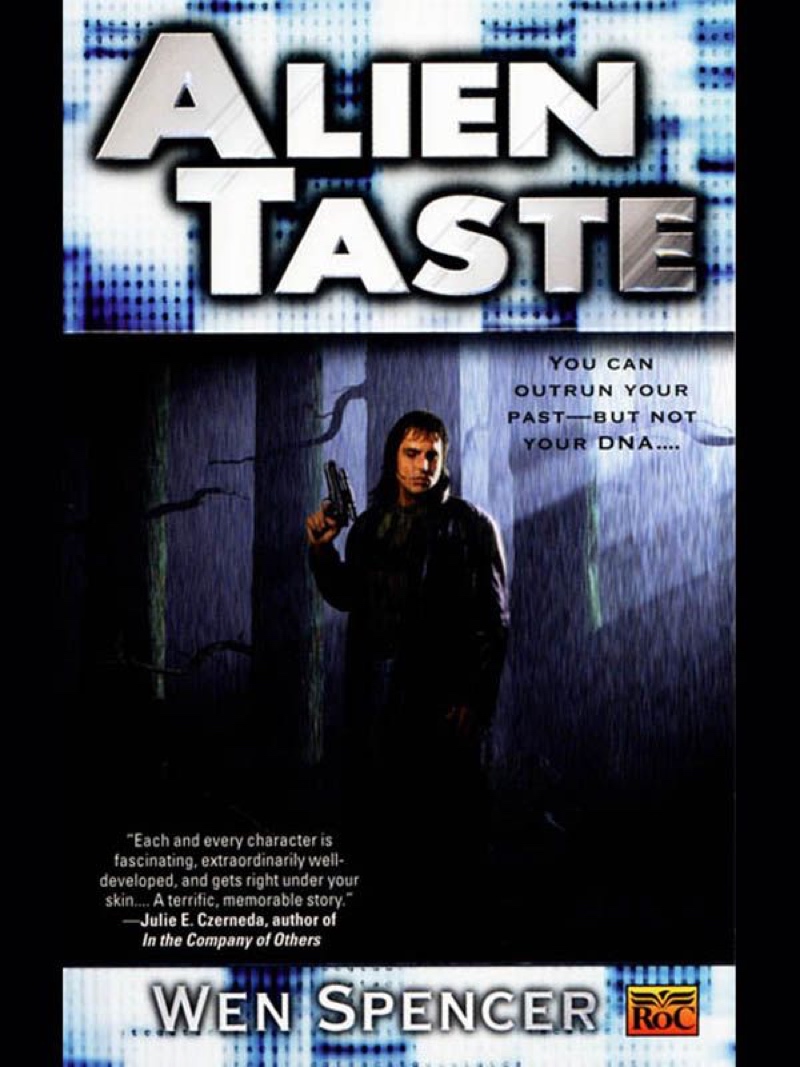 Book 1 of the Ukiah Oregon Series.

Ukiah Oregon and his senior partner, Max Bennett, are summoned by the police to the home of four college students. Three of the coeds have been hacked to pieces and the fourth is missing, presumed kidnapped into the nearby Schenley Park. Wired for sight, sound and global position, Ukiah starts the desperate search for the missing woman. Deep in the dark rainy woods, he finds her – insane, armed and deadly. His fight for his life marks his entry into a secret war between aliens.

Winner of the 2001 Compton Crook Award

Spencer takes readers on a fast-paced journey into disbelief. [Her] timing is impeccable and the denouement is stunning.” — ROMANTIC TIMES (4 star review)

Excerpt from Chapter One

The wooden back porch looked unpromisingly clean of evidence. Ukiah dropped to his knees and ran his hands over the flaking gray wood. Bare wood. Dirt. Asphalt. Crushed grass. He hit a blood trace and stilled. Two blood types, mixed together. He identified the first: the dead girl in the foyer. The second came from the dead girl in the living room. He hazarded a guess that the blood had mixed on the sword blade and dripped on the wood. There was a faint smear of blood beside the first trace. He focused on the worn wood, found the faint outline with his fingertips. A small woman’s shoe, right foot.

He crept forward, running fingers before him. His mind focused on the wood and everything else vanished from consideration. On the rough cement steps, he found the barest print from the small shoe, again right foot. He moved down to the parking pad, sniffing the still warm stone to help catch the faint trail on the broken asphalt.

Suddenly one of Max’s hands was in front of Ukiah’s eyes, and the other on his shoulder. Dimly, he realized Max had been talking to him. On the porch, now, were young, fit, uniformed policemen — their backup.

Ukiah recalled what Max had said, what he had been too focused to hear. “These yahoos want you to play base command since their men aren’t equipped with GPI tracers. You won’t be coming into the park, but you’ve got the promised backup. You’ve put one of our spare tracers on them, so you’ll be able to keep us together. I’ll try not to outrun them. If we get out of the park, I’m to wait till you can move the Cherokee closer.”

“Good.” Max patted him on the shoulder. “What did you find?”

“She walked out.” He considered the placement of the feet. “No. Ran. Her feet are far apart, barely touching the ground. She’s running, running quickly.”

“Running for her life.” Max swore. “Wait for my mark, then go on, and be careful.”

Ukiah watched him go, feeling uneasy and weird. They often split up, especially if the trail was old but well marked. Ukiah could then track at a run, and Max, who was almost twenty years older, used the GPI tracer and the Cherokee’s navigational computer to drive to points intersecting his route. At the trail’s end, the 4×4 and its cargo were usually vital to getting their client out alive.

I’ve worked without Max behind me, he told himself, I can do it again.

But he didn’t like it. Not now, not with a killer on the loose.

Across the parking pad and the alley of mostly mud and occasional ancient cobblestones there was a wall of trees and weeds, the edge of Schenley park pressing against the neighborhood. The woman’s trail led to a break in the weeds, which screened a well-beaten path. Dusk was full on them and night was hiding in the woods.

Ukiah went down the path quickly, bent nearly in half, hands occasionally striking down when eyes and nose failed him. The woman’s footprints vanished on the hard packed dirt, but blood was sprayed unevenly along the trail as the killing sword was swung in pace with running feet. But who held the sword? He had yet to find the killer’s track.

Behind him, coming like a herd of moose, his police backup scrambled to follow. Dimly he was aware of Max’s voice over his headset, marking his progress via the tracer and coordinating with the police dispatcher. His focus, however, stayed on the blood.

The blood trail left the footpath, turned and followed an animal run through scrub trees. Ukiah ran half-crouched under the bowed branches. The run burrowed deeper into the thick uncut growth, a strange haven of wilderness at the heart of the city.

A sharp whistle sounded in his earpiece and he paused. “What is it, Max?”

“You lost your posse back there. You don’t have backup. Don’t get too focused or you might walk into something deadly.”

Ukiah considered stopping completely, but he could hear his backup now, loud and clumsy, moving quickly closer. He had visions of trying to track while they crowded around him. So he pressed on, skittering down a steep hillside. In the gully below, he found the woman’s footprints again, pressed deep into the mud. She had scrambled up the other side and paused beside a large tree. There, where a sword would hang easily at her side, was a pool of blood. Another set of footprints, a heavy man with large feet, came from the right, following the stream. The woman had stepped behind the tree, letting the man past.

“Max.” He whispered, suddenly aware of the rustling storm wind blocking his hearing. Ukiah crept forward, hating what he was sure he would find.

She followed the man once he had passed, walking over his footprints. “Max, I think the woman is the killer. She’s got the sword.”

Fifty feet through the heavy woods, she followed the man, then she killed him. Ukiah crouched beside a dead uniformed policeman, hacked and sliced with brutal efficiency. “She’s killed a cop. I just found his body. There’s no one else out here but me and her.”

There was a tingling awareness in the center of his back and he turned quickly.

The woman crouched amid the underbrush, her eyes so bright the whites seemed to shine. “You’re one of them. Aren’t you? I could feel you coming, like a light moving through the darkness, a thousand million voices screaming at once. You’re one of them.”

“Ukiah, get out of there.” Max’s voice had gone flat and cold.

“You didn’t tell me it was going to be this way. That I couldn’t even sleep because I had to listen to them breathe. Even when you can’t hear them, you have that damn blood river flowing in your head!”

Ukiah almost stepped towards her, would have if he could have thought of any way to help her, comfort her. But then her eyes snapped back to him, glittering hard as a mink’s at the sight of blood.

“You knew this would happen! You planned it! You didn’t want the other stuff. All you really wanted was them dead, wasn’t it?”

Ukiah held up his hands. “I don’t know you. I’ve done nothing to you.”

She gave a high ragged laugh. “Don’t lie to me. I can tell now. I can tell. God damn bugs. How can they be so loud and you can’t see them? There must be millions of them, but where are they during the day?”

“Ukiah, draw your gun. You’re going to need it out if she jumps you.”

There was flash of lightning and she jumped at him with the speed of a striking snake. He leaped backwards, throwing up his arm to ward off the blow and unbidden came the memory of the fingerless girl. The sword came as a shining arc in the flickering light and he felt the cut along his arm, sharp thin pain. He tumbled, reaching desperately for his pistol. As he gained his feet, the sword kissed him again, slicing upwards along his unprotected throat. Hot blood pulsed from the wound with the pounding of his heart. He slapped his left hand over his slick throat and blindly pulled the trigger. The gun leaped in his hand, the discharge bright in the rain-cloaked night woods. He saw her twitch and jerk as the bullets struck her. His knees buckled and he fell, still desperately pressing his hand against the cut in his neck.

There was another crack of thunder, swallowing the echoes of his gunfire, and it began to rain.